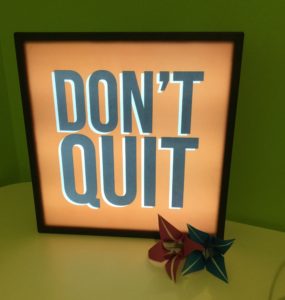 You may have noticed this picture on my little motivational lightbox when I posted my office pictures on Facebook the other day. (If you're not already following me on Facebook, why not!) Yes, there is a story.

Some of you may be aware that November is NaNoWriMo month, and I nearly always sign up. Sometimes I win, but more often lately, I don't. November isn't a good month for me. My daughter's homeschooling report is due in the first week, and this often means I am behind for that first week. Now being behind in the first week isn't so bad, because you have all month go catch up. A couple of days wordcounts divided by 3 weeks is still perfectly doable.

And yeah, I probably won't win now. 3,000 words in a day is quite doable, but every day? Not likely to happen. But that doesn't mean I'm going to give up.

I still have words to write, and I'm going to be writing them anyway. I'm going to set lots of small, manageable goals, and see what happens. Every hear the saying “If you shoot for the moon and miss, you'll land amongst the stars”? (Yeah, I know, not astronomically accurate, but we're talking about motivation here.