You can’t turn this Pantser into a Plotter

I’ve written before about the face that I’m a pantser not a plotter, but as NaNo approaches, and I know I want to get the rough draft of Reckless Remedy out as quickly as possible, I’ve been listening to the lure of plotting.

It has a lot to recommend it. I know I can always write a scene faster when I know where it’s going. Even better if I have a clear picture of it in my mind. I know that I nearly always get stuck on a story around the 20k mark, when I run out of all those initial scenes that have been burning a hole in my brain. I know that my stories would need a lot less editing if I didn’t spend so much time waffling on my way to figuring out where the story is going. 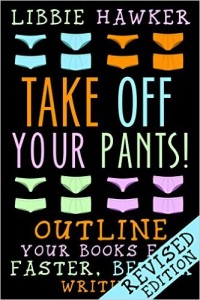 So I gave it a go. I really did. A lot of writer friends have been talking about this book, Take off your Pants, by Libbie Hawker. She’s a writer on a forum I visit, and I find her posts insightful and inspiring. So I downloaded it and gave it a go.

Let me just say that the first half is mind-blowing. It helped me realise that my biggest problem, and the biggest cause of revisions, is not fully understanding my character’s flaw, and how that relates to pretty much everything in the story. Her step by step process of working through this, and getting it down on paper, is going to make a big difference to my stories I think.

After reading through it, I had to sit down and try it out. And I’ve already gone through it for Reckless Remedy. So today I sat down and read through the rest of the book, and tried to write a more detailed outline for NaNo.

Should be easy, right? I have a step by step guide.

But nope. I tried it, and it just wouldn’t gel. I tried to just sit down and write the scenes I could see happening. I made it to chapter 9, which by my reasoning would be about 25% of the way through the book. About where I usually hit my block. And I’m stuck.

No matter how much I push, I just can’t seem to get a whole outline for a novel length book. (Though I can for my shorter serial episodes and novellas, go figure.)

I can only guess that I need more than that general outline. As I write out full chapters, the characters and the intricacies of their situation will begin to emerge. Details that I don’t know, or can’t even guess yet. Those will help me shape the story, and help me figure out that remaining 75%.

I don’t think I can take a shortcut. Looks like I have to do it the hard way.

I think though, that what I have done, exploring the overall character arcs, will make it easier, and hopefully faster.

NaNo is going to be a busy month!