I’m so excited to share the cover for Part 1 of Dragon Ruins, Waking the Dragon! I’ve been working on this serial for a while now, and it’s really exciting to have the first part so close to complete. If you’re impatient, it’s available for preorder on Amazon right now. The release date is set at the 31st of August, but I hope to have it ready long before that. 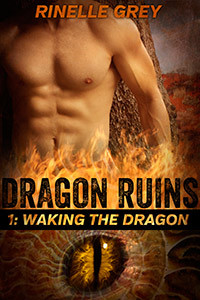 When his centuries long slumber ends abruptly, dragon prince Taurian finds himself in a whole new world. Now, pursued by an ancient enemy, his survival depends on the human woman whose presence had awoken him.

If you haven’t read a serial before, it’s kind of like a TV series in book form. Each part is shorter (Around 15,000 words or 50 pages), and adds to the storyline. Dragon Ruins will be 6 parts, and I’m hoping to release one a month. If you want to know when each part comes out, remember to sign up to my mailing list!