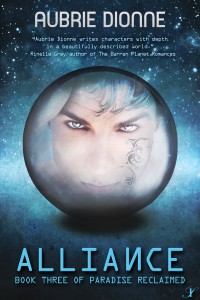 I recently had the honour of being asked for a cover quote for Aubrie Dionne's new sci-fi romance, Alliance. You can click on the cover here to get a larger picture, so you can read it.

And today, I'm sharing this awesome story with you. Aubrie Dionne is on my auto-buy list, and I can definitely recommend any of her books, but particularly her Paradise Reclaimed series.

This is the third book in this series, and so far, it's my favourite. It follows  Lyra, and her quest to get to know the beautiful alien.  Sometimes I find it hard to get back into a series like this, where each book follows a different couple, but not this one. I was immediately drawn back into the world and the characters, even though it's been a while since I read the last book.

Aubrie Dionne writes characters with depth, in a beautifully described world. And it's a world that is so different to ours, a lush, colourful, tropical planet, where many dangers await.

Another thing I loved about this book was the introduction of Lyra's brother, and their relationship, as both grow and discover things about themselves throughout this story. It really added another dimension to the book, and I'm hoping we get to know her brother better in a future story.

This story was a trip away from normal life, into a world where everyone has the potential to be a hero.

“Saving him meant saving her colony…”

Lyra Bryan has been saving people her whole life from a chick in the ventilation pipes to her mentally ill brother when his mind drifts back to Old Earth. She meets her match when she finds a gorgeous alien man aboard the arachnid ship. Captured after a failed attempt to save his people, his spirit is broken, craving only vengeance. To save her colony, Lyra must save his body and soul.

Lyra’s lifemate, Tauren, is jealous of her obsession with the alien man and will do anything in his power to break them apart. While they travel to the arachnid’s home world to defeat the mother brain once and for all, they must set aside their differences and work as a team. But, can Tauren be trusted?

Aubrie Dionne is an author and flutist in New England. Her books have received the highest ratings from Romance Times Magazine, as well as Night Owl Reviews and Two Lips Reviews. She has guest blogged on the USA Today Happily Ever After Blog and the Dear Teen Me blog and signed books at the Boston Book Festival, Barnes and Noble, and the Romance Writers of America conference. Her writings have appeared in numerous publications including Mindflights, Niteblade, Silver Blade, Emerald Tales, Hazard Cat, Moon Drenched Fables, A Fly in Amber, and Aurora Wolf. Her books are published by Inkspell Publishing, Astraea Press, Spencer Hill Press, Entangled Publishing, Lyrical Press, and Gypsy Shadow Publishing. When she's not writing, Aubrie teaches flute and plays in orchestras.