Why Goats and not Cows? 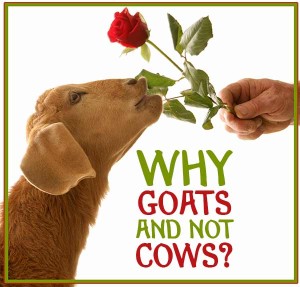 The traditional picture in a low tech society is the farm girl heading out to the barn, bucket swinging, to milk the cow. But in Reckless Rescue, it's not a cow Marlee's milking, it's a goat.

So why did I choose goats instead of cows? One of the reasons is that I have personal experience with keeping and milking goats, but not cows.

But my real reason goes deeper than that, and comes of spending a bit of time thinking. If you knew you were going to an uninhabited planet, with limited resources, which would you choose – a goat or a cow?

I chose goats for the following reasons:

They're smaller – They fit on your spaceship better, they're easier to handle, they're just all round more manageable. Yes, this does mean that they produce less milk, but in reality, one goat bred for milking can easily give you a few litres of milk a day, and that's enough for most families.

They breed faster – It's quite normal for goats to have twin pregnancies, meaning two new goats for every birth. If you're wanting to transport a few animals to build up a bigger herd later, that comes in handy. Keep the girls for milk, and use the boys for meat. They also have a shorter gestation, so less time without milk in between times.

They'll eat anything – While a goat's legendary powers to eat anything may be a little overstated, it's still true that they will eat a wider variety of food than cows. Goats are browsers, not grazers, and they'll happily eat leaves, bark, food scraps etc, as well as the usual hay and grains. This makes them the ideal animal to keep in tough conditions. Just remember though, they don't eat tin cans (though they may nibble if they still smell like something interesting), and while they might pull your washing off the line, they have no interest in actually eating it.

A few downsides: Goats milk does taste different. Commercially produced goats milk (where the goats have probably been fed on hay and grain) isn't too different, but a goat that has been grazing on anything that's available does have very strongly tasting milk. But in a real survival situation, I think you'd take what you could get. And you do get used to it, and even come to like it, after a while.

Cream: Cream doesn't separate from the milk as easily as cows milk does, so you get very little of it. And though I've read that you can make butter out of it, I suspect it would be quite strong tasting!

They'll eat anything: Yep, this one belongs in both the pros and cons. Goats are escape artists, and once they get out of their pen, the first place they'll probably head is your vegie garden or orchard.

The most important thing though, goats are way cuter, and a lot more fun than cows.

Have you ever tried goats milk? If you were in a survival situation, which would you keep, goats or cows?