Y is for Young 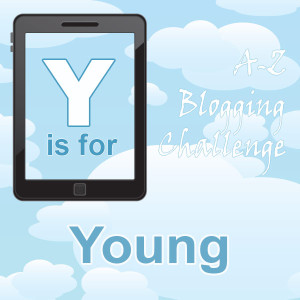 I wrote recently about discovering that my novel could easily fit into the New Adult category, and since then I’ve realised that I write about younger characters quite a bit. Aside from Reckless Rescue, I have another novel with a nineteen year old protagonist who begins the novel by faking her own death and running away from home. (Well, there’s a little more to the story than that, and it’s not quite what it seems. Really.)

So this made me wonder, what is it I enjoy about writing younger characters? I mean, I’m in my thirties myself, so why not write about characters who are also in their thirties? That would make sense right?

Am I writing about younger characters because I wish I was still nineteen myself? I don’t think so. I’m pretty happy with being in my thirties. I like my life, I like who I am, and I like the experience I’ve gained in those years. I wouldn’t really want to be nineteen again.

Some of it, I think, is that to me, the thirties are the years for having kids. (Not saying it has to be so for everyone, but it has been for me personally.) And while my characters always seem to end up pregnant somewhere in the novels, I rarely write about characters with kids. When I do, I make sure it’s realistic. You won’t find my characters having kids then leaving them with friends while they’re off having exciting adventures. They tend to stay home with their kids. Which isn’t so exciting to write about. (Not in fantasy and sci-fi anyway.)

Mostly though, it’s that at nineteen, the world seems so new and full of possibilities. I love exploring that time and those feelings, even though I don’t want to live them again myself.

And, of course, to balance it out, I do have some older characters. One fantasy novel has a 27 year old protagonist, and in my favourite series, the female character is 73!

How about you? Do you prefer to read or write about characters you age? Or is there another age you prefer? Any ideas why?