K is for Kissing 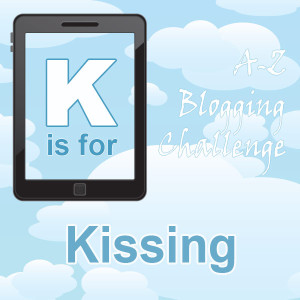 If you’re writing a romance of any description, or even just a story with romantic undertones, chances are there is going to be kissing. And what’s so hard to write about a kiss, you might think. At least it’s not sex, right?

Well, surprisingly, kisses are harder to write than sex. They’re short, and everyone knows how they go. Describing the actual process (all that saliva, eww), really doesn’t lead to a romantic scene. You need something more. What I think really makes a good kissing scene, is the character’s emotions. So that’s what I try to emphasize in my scenes. Whether I achieve that or not, well, I’ll leave it to you to decide, with an excerpt from Reckless Rescue.

Background: Marlee and Tyris are pretending that they are in a relationship to stop the rest of the community from pressuring them. But, of course, there are questions as to whether their relationship is real or not. This scene is from Marlee’s point of view, and her mother is the one asking questions.

“You have to admit it’s a fair enough question. The two of you haven’t exactly been overly affectionate.”

“I didn’t realise that public displays of affection were necessary,” Tyris said. Thank goodness he was defending them, because she couldn’t think of a thing to say. “But if this can be solved by a simple kiss…”

He bent his head and all thought of her mother and defending themselves vanished. His lips crushed hers, and heat shot through her in an unexpected surge.

Her lips parted, and she rose onto her toes to bring herself closer. Of their own accord, her arms went around his neck. Tyris pulled her body tight against his with a hand in the small of her back. For some reason, her knees felt weak.

Pulling back, he stared down at her, his eyes dark with desire and flashing with frustration. Marlee caught her breath.

“Hopefully that should be sufficient proof,” Tyris said icily, “but if not, feel free to visit, and I’ll be happy to give a more intimate demonstration.” His arm didn’t leave her waist as he swept both of them towards the door, leaving her mother, mouth hanging open, behind them.