Table of Contents in Novels – Do We Need Them?

** Update: After a recent issue with scams on Amazon, a few people have had emails from Amazon because of their table of contents at the back of their novels. Amazon has publically said it is acceptable, but their style guild recommends putting them in the front for the best reader experience. I moved mine before I heard that, and am not moving them back. The small amount of room they take up in the look inside isn’t a huge deal to me any more. Funny how things change once you’ve been publishing for a while! ** 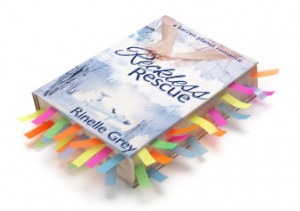 So, it’s Valentine’s Day (here in Australia, almost over in fact), and no novel yet. Sorry!

Formatting is mostly done. I sent it out to friends and family to proofread, expecting them to find a couple of spelling mistakes, or missing punctuation marks. But of course, they’ve found other issues that I need to fix. Hopefully not long now.

Today though, I wanted to raise a new question. One of the recomendations Amazon makes in their formatting guide is to include a Table of Contents.

On the surface, this recomendation makes sense. In an ebook, a table of contents enables us to jump straight to the chapter we want in a book. In a non-fiction book, they’re essential, and I use them frequently. If you download a book sample, the table of contents can give you an overview of the topics included.

But in a novel?

Usually the table of contents consists of:

It doesn’t tell you much about the book at all, except that it contains chapters. (Which hopefully you already guessed.)

I don’t know about you, but I haven’t used the table of contents in a novel once. If I pause reading, and need to get back to where I was, I just open the book and it’s kept it’s place. If I really need to find a certain place again, I can bookmark it.

I checked a few ebooks, and while almost all of the self published ebooks have one (probably because of Amazon’s recomendations), many of the traditionally published ebooks didn’t include one.

So what do you think? Does a table of contents have a place in an novel ebook? Have you ever used one? Do you include one in your ebooks?

Edited to add: I’ve had a couple of comments, both here and elsewhere from people who do use the table of contents in an ebook to refer back to certain scenes, so in the end, I decided to include one, but I placed it at the back of the novel, so it didn’t impact on my front matter. I also like the idea of giving chapters more descriptive headings, so I’m thinking of trying that in a future series. I’d love to hear more opinions and discussion either way!