Why I Write Fantasy and Science Fiction 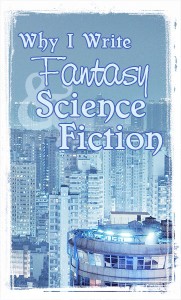 I’ve loved fantasy since I discovered Anne McCaffrey’s Dragons of Pern series in high school.  So in some ways, it’s no surprise that when I started to write, I choose fantasy.  But the more I tried to write fantasy, the more it became focused on the relationship between two characters.  Luckily, a a new genre (or genre’s) is opening up.  Combining fantasy or science fiction with romance is something altogether different.

For me, the draw of writing fantasy romance is that it opens up a whole lot more possibilities.  Fantasy romance is not limited by the real and possible.  It gives me the chance to explore ideas such as what would happen in a world where it was expected twins would marry the same person (and why would such a rule exist?)  What about the implications for seeing your future with your loved one?  How would you react and would the things you did to make that future happen, or avoid it, change what you had seen?  What if someone used a magic spell to marry you to someone who you’d never met, but no one would believe you?

Science fiction offers the same scope.  In fact, my intention initially was to write only in fantasy, until the idea for Reckless Rescue came to me.  It first started as a vision of Marlee standing at the doorway of a spaceship, looking out at a world of technology she had never imagined.  Reckless Rescue is the story of how she came to be there, and Reckless Rebellion is what happened once she arrived.  So many ideas to play around with in this story, a different kind of ‘shipwreck’ on an unknown planet and a society that has enforced strict rules to try to compensate for a dwindling population.

Lots of people are a little scared of science fiction and fantasy.  They can think that they aren’t technical, so they won’t understand a science fiction story.  Or that they don’t like dragons and elves, so fantasy doesn’t appeal to them.  But these genres have evolved a lot since their early inceptions in Tolkien and Asimov.   And really, the worlds are just a container for the real story, the relationship between the hero and heroine.

At heart, I’m an incurable romantic.  I really do believe that love can overcome obstacles, and I love to play with obstacles that are not there (or not common) in our world, and see what would happen.