Before you ask, yes, Sarian and Ultrian’s story is coming! I’m hoping to have it out later this year. But before I get to that story, I have another one to finish – Raven’s story. You may remember his introduction when he invited Verrian up to sing at karaoke. Or maybe when he lent his motorbike to Lisa and Verrian to help them escape Ultrima. And if you’re up to date, you’ll know that he was the one who woke Sarian, and is bonded to her through the Mesmer. But we know Sarian isn’t going to fall for him, so who is? 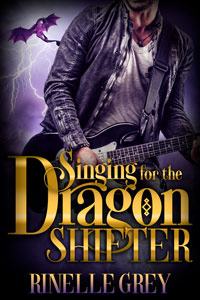 A down on his luck rock star. A dragon warrior who just wants to sing. And a princess who needs them both. Music can’t possibly be the solution—or can it?

Raven hadn’t meant to get involved with the dragon shifter clan. He’d gone with them mostly to avoid an angry dragon turning up on his doorstep asking where they were. Waking the future queen? Well, that was just a bonus. He hadn’t realised quite how complicated that would turn out. Worrying about his failing music career is a dim and distant concern when his life is on the line yet again.

All Fayrian ever wanted was to use her musical talents to entertain and to bring joy to her clan. Pity they’re at war, and her ability to fight is far more valued. When she’s assigned to protect and wait on the future queen, she hopes this might be her chance. If Rian clan won’t appreciate her music, maybe the queen’s Mesmer mate, the human musician Raven, might give her the opportunity she longs for.

But sometimes, sacrifices must be made. The princess might not love Raven, but she does need him. As the war between the dragon clans heats up, with the queen right at the centre, Raven and Fayrian realise that music can’t solve their problems.