For a Limited Time Only! Grab Waking the Dragon FREE!

Waking the Dragon, book 1 in my Return of the Dragons series, is FREE for a limited time only – grab your copy before it’s gone!

Don’t miss out! FREE until the 24th of July! 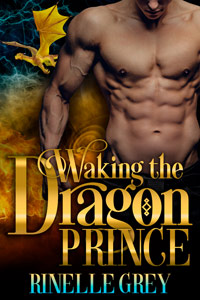 Download Now!
Waking a prince with a kiss seems like something out of a fairy tale. Too bad this isn’t a fairy tale and a kiss isn’t all this sleeping dragon prince needs.

Jaded archaeologist, Karla, finds more than artifacts when she ventures into a cavern hidden in the middle of the Australian outback. The half naked man sleeping inside is about to change everything she ever knew. Her touch does more than awaken him from his slumber. It rouses something in her. An instant attraction that’s stronger than anything she’s ever felt before.

Dragon Prince Taurian’s whole world is turned upside down when he’s woken by a human woman. He’s overslept by three hundred years and the world as he knew it no longer exists. Nothing is familiar, and everyone he’s ever known is gone.

Except his ancient enemy, who has also managed to survive. Taurian can’t defeat him on his own. He’ll need the help of the human woman who saved him. Can her love give him the strength to defeat his foe?

Waking the Dragon Prince is a full length (138,000 words) complete story with a happy ending. If you like hot dragon heroes, the strong women who love them, and a heartwarming HEA, then you’ll love the Return of the Dragons series.