The Book that Just Wouldn’t End

I’ve been promising it since book 3 was released almost 2 years ago. I’ve been writing it on and off since November 2015. Editing has taken 3 months! And that cover, I’ve been struggling with that since I first decided to write an alien as a main character.

Why has Reckless Remedy been so difficult to write?

I could say it’s because I have an alien as a main character. This creates all sorts of problems, starting with how to show him on the cover, to how they are going to communicate, to what was his home world like and why is he the way he is? Those factors have certainly influenced why it’s taken so long.

I could say it’s because the other main character is a doctor, and the main conflict in the story revolves around medical issues, which has meant a lot of research!

I could say it has something to do with the fact that this is the longest book I’ve published to date!

The truth is, everything about this book has been hard. There were a lot of times when I was tempted to give up, and go back to my dragon shifters. They’re shorter, easier, and I know people will buy them in large numbers.

But I also love this story. The Barren Planet series was my first published series, and it will always have a special place in my heart. I’ve built these characters up into people I almost feel like I know.

And maybe that’s why it was hard too. I wanted to do them justice. I wanted to make sure I included everyone my readers would want to see. (But I couldn’t, there were too many!) I wanted to give them the ending they deserved.

And yes, before you ask, this will probably be the last Barren Planet book. While I love this series, it just doesn’t sell well enough for me to continue to write full length books in it. (Especially not if they’re all as difficult as this one!).

Its due out in a few days, on the 31st of July, and I hope all those who have been waiting for it enjoy the story. 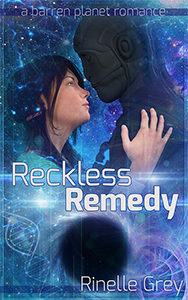 Alien supersoldier Kugah is on the run. He needs the human’s wormhole technology to find a new home, far away from anyone his genetically engineered presence can hurt. Then he meets Amelie. Her gentle, caring nature opens the possibility of a future with someone by his side.

Amelie is too busy being doctor to a spaceship full of pregnant women, she doesn’t have any time to regret being alone. But when the passengers begin to show signs of unnaturally rapid ageing after a desperate trip through a wormhole, she has no one else she can rely on other than the strong, silent alien. The things she’s starting to feel for him must be just a product of the fact that they could soon be the only two left alive on the ship.

Their species aren’t even compatible. They couldn’t possibly be falling in love.