Ending with a Bang!

Sorry I’ve been quiet lately. I’m so busy trying to get the final part of Dragon Ruins just right. So many ends to tie up. But I’m getting close now. In fact you can preorder Mating the Dragon, the 6th and final part in the Karla and Taurian’s story, now.

Here’s a little snippet, just to tide you over until it’s out. 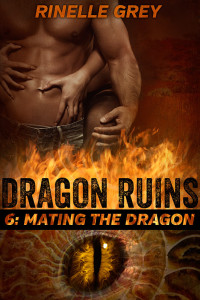 Wayrian blushed. “Will it do?” She echoed Karla’s thoughts.

She looked beautiful. The outfit might be nothing like anything Karla would have worn as a bride, but it was stunning none the less.

And it just rammed home the fact that this young woman was about to marry the man Karla loved.

No, not just marry, mate with. And in dragon terms, that meant even more than marriage. The ceremony would tie Wayrian and Taurian together with a magical bond so strong they would even die together.

Taurian would forget all about the human he had cared for so briefly.

Okay, that might be a little dramatic. He’d remember who she was, and the things they had done together. He might even be able to remember that he’d felt strongly for her. But those feelings would be gone, never to return.

For him, anyway. Karla wasn’t sure that the things she felt for him would ever fade. Would she ever be able to conjure up a memory of his face without a resulting stir in her heart, like the one she was experiencing now?

Would time release her from this pain, or would she feel this forever? She wasn’t sure which she wanted. Life would be easier if this memory of loving Taurian faded, but right now, she wanted to feel the pain. It reminded her that it was real, that she had felt something so amazing that it would live with her forever.

It made it more important, more meaningful.

She heaved a sigh. She could ponder those deep and meaningful things later, when the adventure was over. Right now, there was still more excitement and danger to deal with before she had that luxury.

“It’s perfect,” she told Wayrian. “Ultrima will be totally convinced.”

In case you missed it, since I haven’t posted recently, Denying the Dragon is out now. You can find the links in the sidebar.