Denying the Dragon is available for preorder! 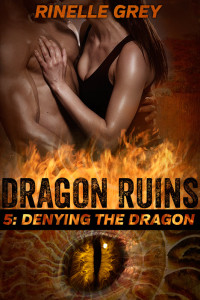 Part 5 in the Dragon Ruins serial is now available for preorder! I’m editing it now, and hope to have it out before the end of January.

When Taurian’s clan contacts them, Karla knows that her time with Taurian is coming to an end. He doesn’t need her any longer, and even though he still seems keen to make things permanent between them, she’s not sure she’s up to the commitment.

Taurian expected his desire for Karla to fade once he as back with his clan. Instead, it only intensifies. He’s determined to convince her to be his mate—despite his clan having a mate already picked out for him.

But there may be no time for love and mating, when Taurian’s enemy is still after them.