I’m so excited to share this new release with you. I have a Christmas story! And it’s part of the Sugar, Spice and Shifters box set, with 14 other awesome authors. Not only that, but this story is from my Dragon Ruins serial. Find out more about the mysterious golden eyed man who sent Karla after Taurian.

*** This box set is finished now, but you can still grab my story from it below! *** 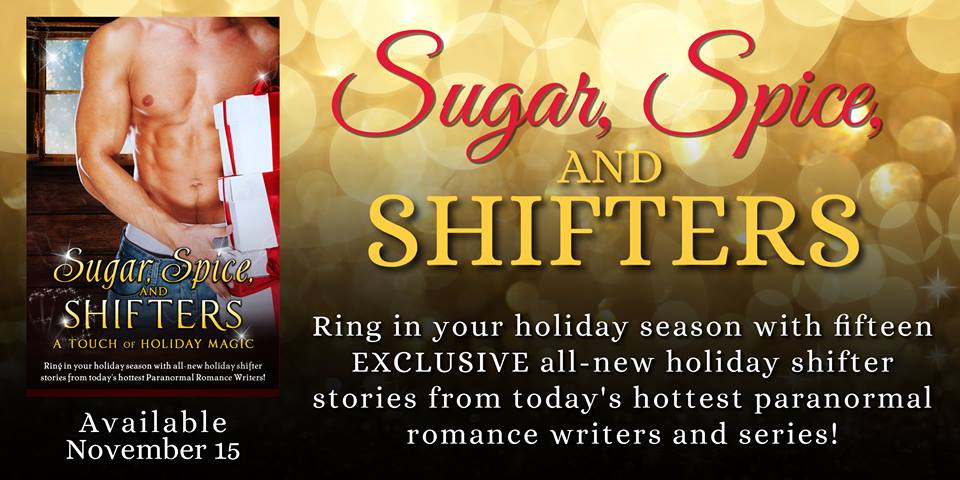 From the sweetest of mating claims to the spiciest of holiday wishes come true, this set has a perfect present for every reader. Whether you’ve asked Santa for wolf shifters, werebears, or dragons, this box set of ALL NEW holiday tales from bestselling authors gives the best gift any lover of paranormal romance could want: a little naughty n’ nice with a whole lot

All fifteen holiday tales are available exclusively for a limited time!

*** This box set is finished now, but you can still grab my story from it, Bringing Christmas to the Dragons, for only 99c! ***

Just in case you’re not already convinced, here’s an excerpt from Bringing Christmas to the Dragons!

No time for second thoughts. Jayrian’s legs trembled as he walked down the long passageway to the elder’s chamber. More to do with the exertion of the long ride than nerves, he was certain.

The sight of all five elders, one from each of the different types of magic except lightning, in full dragon form, made him catch his breath. It was rare for the dragons to shift these days. Jayrian had only done it once or twice himself. They were too afraid the humans would see them. But here, deep in the dragon’s lair, they were safe to be what they truly were.

“You wish to see us, youngling?” Kyrian boomed inside Jayrian’s head. The metal dragon’s scales glinted silver in the firelight. The dragon’s strength and age gave him an unofficial leadership of the group of elders.

After weeks in the human village, the dragon’s telepathy took some getting used to.

Jayrian swallowed. “Yes, elder. I have news from the human village, and it is not good.”

“Well spit it out,” Mesrian prodded. “We’re not getting any younger, you know.” An encouraging smile removed any sting from her words.

Mesrian’s impatience mirrored his own. Not surprising given she was a fire dragon as he was. And her matter of fact words, helped Jayrian calm himself. He couldn’t afford to upset the elders. He couldn’t risk them continuing to delay making a decision. They had to act now. Before it was too late.

“The humans are going to mine the Dragon Scales. They’ve found a coal vein there,” he blurted out.

The only sign of surprise Kyrian gave was a slight widening of his eyes.

The other dragons rumbled in alarm.

“This is a concern,” Mesrian said slowly. “When?”

“I don’t know. Soon, in the next few weeks, but not until after New Year,” Jayrian said. “They do nothing until then.”

“That gives us time,” Kyrian said. “Do you have any more information?”

This was Jayrian’s opening. He took a deep breath. “Edtrima still guards the Mesmer chamber entrance, but I know the perfect human to send instead. She’s a…”

“Enough,” Kyrian raised a claw. “We have already listened to, and decided against, this plan of yours. Before the princes entered their Mesmer sleep, they ordered us not to divulge our existence to the humans. This is not sufficient reason to disrespect their wishes.”

“No. Do not speak of it again. Return to the human village, but keep your distance. You are there to observe them, not make friends. Remember that. If you find any further information, return immediately. You are dismissed.”

Jayrian stared at the faces of all five elders, but each looked impassive and determined. Like old, weathered rocks. Mesrian looked sympathetic at least, but that didn’t mean she was any more likely to be swayed than the others. He’d tried before.

His shoulders slumped as he walked slowly back out of the elders chamber, down the corridor, and past all the human form dragons. They watched curiously, but no one attempted to stop him as he headed back out to his bicycle.

He didn’t see his parents, and right now, he didn’t want to. They would act sympathetic, but they never meant it. They agreed with the elders. Everyone always agreed with the elders. Wait until the princes wake, then they can make the decisions. That’s why they’d lived their entire lives in hiding, unable to even transform into their natural form for fear of being discovered.

He could probably find out when the mining was due to happen if he searched around a little, but what was the point if the elders weren’t going to do anything? His plan might not be foolproof, but it was better than anything anyone else had put forwards. He even had the perfect person to wake Prince Taurian, but they didn’t even want to listen.

Prince Taurian’s Mesmer chamber would be discovered when the mining started. There was no way around it. Then humans would be involved in dragon business, no matter what the elders wanted.

If they kept this up, they’d never meet him. No one would.

With time running out before his clan’s prince is discovered by mining or killed by enemy dragons, dragon shifter Jayrian needs to convince the elders to accept help from the humans. He hopes that the clever librarian, Gretchen, might be able to help him with that. He didn’t count on falling for her—that wasn’t part of his plan at all.

Gretchen longs for adventure outside of the books she reads in her job as a small town librarian. But not the kind that involves her moving to the big city to take the promotion her Aunt Mary offers. The cute guy who’s been hanging around the library seems far more exciting—there’s just something about him that draws her—so on impulse, she invites him to her family’s Christmas celebration. When a dragon lands on the front of her car on the way there, she wonders if she’s gotten more than she bargained for.

Together they must find a way to save his prince and clan, without sacrificing who they are, or their budding relationship.