Wow, it's been a busy week!

Confirming what everyone says, the best way to promote your book is to write another book! Not sure if this will increase Reckless Rescue's sales yet (since it's been free, so will get some sort of bump from that), but I can say that Reckless Rebellion's first few days of sales have been WAY above what Reckless Rescue's were.

The launch wasn't all fun and games though. On the first day it was out, I downloaded a copy of Reckless Rebellion, and realised, to my horror, that the formatting wasn't working correctly!

It wasn't major, and didn't affect readability, and probably no one but me (who knew how it was supposed to look!) noticed, but it did but me. You can see from the two screencaptures below, that the paragraphs weren't indenting properly, and there were large gaps between them, more like web paragraphs than book ones! 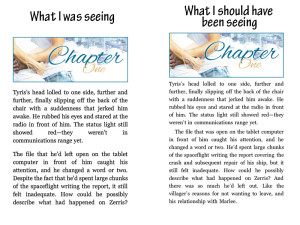 Funnily enough, this only affected the iPad version, that I could tell, making it rather had to identify and test. But after three days of tearing my hair out, I fixed it.

Turns out I was missing a tiny line or two of code from my stylesheet, and for some reason, this was only affecting the iPad version? No idea why, but it's fixed now. (And I updated my Dreamweaver post, so no one else experiences the same issues!)

Phew. So glad it's sorted. I've contacted Amazon to see if they will send out an update to anyone who's already purchased the book, and having the same problem. (I didn't on my Reckless Rescue until I deleted and re-downloaded it.)

So, with that all sorted, I'm finally back to writing Twin Curse, which is supposed to be off at the (content) editor any day now! I'm so close to the end I can taste it, and I'm loving how it's shaping up. Can't wait to send this book out there and see what other's think of it!

And as well, I'll be finding a bit more time to update my blog regularly, respond to comments, and visit all my friends. Sorry I've been so absent lately!