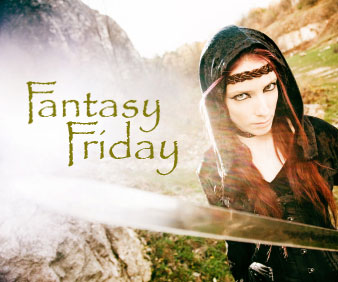 This will be the last Fantasy Friday for a while. Next month I'll be focusing on Reckless Rescue and Reckless Rebellion. (Picked a release date of the 18th of September, yay!)

Today I'm going back to Jack's story. After waking up finding she's handfasted to a stranger she barely knows, her day's about to go from bad to worse…

The man seemed to know exactly where he was going, stepping out the door and looking carefully in each direction.  Jack wasn’t exactly a couch potato, but she had to pull out all her stamina to keep up with him.  He moved quickly, only looking back occasionally to be sure he hadn’t lost her, and nodding approvingly when she was never more than a few steps behind him.  His route wandered all over the city, but every time she caught sight of the palace between the houses, it seemed a little closer.

Jack was just starting to think she was going to have to ask him to stop for a breather, when he stopped so suddenly in front of her that she ran into him.  “Ooff,” she huffed.  “Give me some warning next time.”

“Yes, it would have been nice to have some warning,” a strange voice said.  “But from what I hear, that’s what you do best, jump into situations without any warning for those involved.  Well this time you’ve gone too far.  No one dishonours my sister and gets away with it.”

Adrenalin flooded through Jack as she heard the sound of steel being drawn.  Much as she wanted to get a look at the attacker and the situation, she stayed sheltered behind the man for just long enough to reach for the knife tucked into the waistband of her skirt, thankful that she hadn’t chosen to leave it behind.

The feel of the leather bound hilt reassured her just enough to step out from behind the man, who was reaching for his own sword as he said, “I meant no disrespect.  It was a mistake, one I am about to rectify.  This need change nothing.  There is no need for bad blood between us Ferris.”

Standing opposite them wasn’t just a single man, Jack should have guessed his sort wasn’t the type to fight alone.   But she had no trouble picking out the one who had spoken, the one she guessed was the man’s intended’s brother.  His clothes, from the carefully crafted windblown hairstyle, the elaborately tied necktie, the subtly patterned waistcoat, down to his unnaturally shiny boots, declared that he was the one in charge.  The two men who stood on either side were well dressed, but were obviously his followers.  Which did not mean they didn’t need to be watched.

“Half the city saw you last night, pledging yourself to that woman.  You will answer for this.”  At that point, he noticed that Jack had stepped out, and he turned his attention on her.  “And don’t think I’m forgetting about you.  I’ll deal with you after I’ve finished with him.”