D is for Doing Without 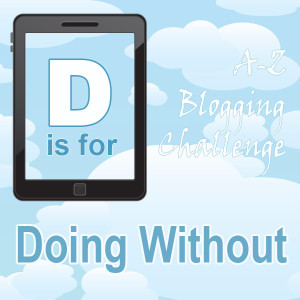 Doing without is something the characters in my novel, Reckless Rescue, have had to learn to live with. When their planet was threatened by a life ending meteor, the political leaders fled, taking with them the valuable research and scientists, leaving everyone else behind.

Some of the people managed to escape to a nearby planet, but with no way to go further, they werestill cut off from the life they knew, and any access to resources. In the twenty years before my story starts, they've had to learn to live without access to shops, electricity, or any of the luxuries we all take for granted.

They have to grow and process all their own food, make their own clothes, and build their own houses. It's lucky they're a resourceful bunch. Despite all this though, many of them want to return to the Colonies, not because of the hardships they live with, but because there is a quiet menace on the planet—a gas that is destroying their fertility.

Doing without children is far worse than all the other things they have learned to live without.

If you're interested in reading more, you can read the first two chapters of Reckless Rescue for free.

What would you hate to live without? Chocolate? Coffee? Running water? Indoor plumbing?