How can we Encourage more people to read Sci-Fi Romance? 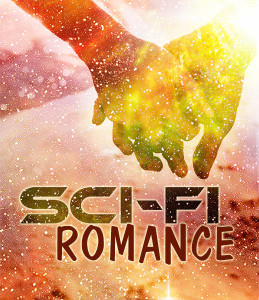 I've been reading a few interesting posts lately about science fiction romance, and whether it will gain the same popularity that paranormal romance has recently. (Such as this one at Smart Girls Love Sci-Fi.) It's a fascinating topic.

Science fiction writers are looking for something to make them think, to challenge their brain, and importantly, they like their science within the realms of believable. In the scheme of books, science fiction is a relatively new genre, with a perception of being technical, and hard to understand. It is also traditionally a genre written and read by men.

Romance readers, on the other hand, want something light, enjoyable, and with a guaranteed happy ending. People choose a romance book to read when they don't want to be challenged. Unsurprisingly, it's a much larger category than science fiction, with many sub-genres. Romances are traditionally seen as written and read by women.

This doesn't mean they can't be combined.

There are many sci-fi romances out there. But currently, it remains a niche market. It doesn't even have it's own clear cut category on Amazon, making it rather hard to find.

A large number of general readers avoid science fiction. Many romance blogs say they won't read it. When I was asking friends if they'd have a read through Reckless Rescue and let me know what they thought, I had several responses of people saying “I don't read science fiction.”

So  how do we bridge that gap?

In my opinion, the best place to start is making sci-fi romance more like romance than sci-fi.

Soft v's hard – soft sci-fi, with less emphasis on the technical story, and more focus on the people, is more likely to be accepted in mainstream fiction. Reckless Rescue is very much soft science fiction. There aren't any techinical details, faster than light travel is just there. It explores the social issues rather than the technology.

Worldbuilding – Sci-fi excels at creating vivid and detailed worlds, were everything works differently. This can be quite jarring for a general reader. There is so much to learn, so much they don't understand, that it can be quite hard to see the romance within the world. The more world elements that you can keep the same, the more comfortable the experience will be for your reader.

Blurbs – Sci-fi worlds are different to the one we know, and thus a lot of sci-fi romance blurbs focus on explaining the world and how it works. The more focus there is on the romance elements, the characters and who they are, the more likely they are to be picked up by a general reader.

Covers – If you look at a science fiction novel next to a romance novel, there is a clear difference in the covers. Most sci-fi romance borrows more from sci-fi than romance in their covers. This appeals to the sci-fi readers, but reinforces the idea that sci-fi is a technical and hard to read genre. I've gone the other way. The cover of Reckless Rescue is clearly romance, both in the colours used (soft pinks and blues), and the images. The only clue to it's science fiction setting is the spaceship crashed in the snow.

Time – Of course, one of the biggest factors is beyond our control. As science fiction continues to be more popular in movies and TV, more people will come to see it as normal, and consider it as an option in reading as well.

Isn't this compromising what Sci-fi is?

In my opinion, no. Sci-fi is about fiction involving science as it's basis. There are, and will be, a variety of levels of science fiction, from soft to hard, and everything in between. I'm NOT proposing that all science fiction should be soft science fiction, just that it offers a comfortable starting point for someone wanting to dip their toes into the genre.

Once they see how nice and warm the water is, they might feel more comfortable wading in.

What do you think? How do you see the blending of sci-fi and romance?