The Challenge of Naming Spaceships 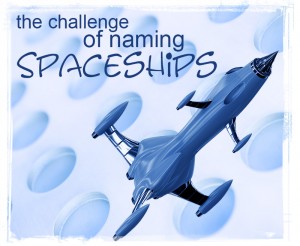 Reckless Rescue is so close to being ready to publish I can taste it! I’m aiming to have it out by Valentine’s Day!

I’m just going through the last of my readers comments, and one suggestion was to come up with names for the two spaceships that are prominent in the story. While I love the suggestion, and think it will really give my two ships more personality, I also hate the suggestion because it means I need to think of names!

Character names I can usually do. Since I write science fiction and fantasy, I generally put together some syllables that sound namish, and fit the feel I’m aiming for for that particular character. Ship names though, require a little more thought. For some reason, I feel like they should have meaning.

The first ship I have to name is a deep space exploration vessel. Fuelled by ‘anysogen’, the rare gas that enables faster than light travel, Tyris is using it to search for more of the valuable fuel. It’s fast, sleek, and modern, and it needed not only a name, but also a name for the type of ship.

In the end, I went with an acronym for the type of ship. It’s now a HSLD-SV Mark II. I’m not sure whether what that stands for will come into the story or not, but in my head, it stands for High Speed, Long Distance Survey Vessel. This specific ship is called the Hylista. A random string of sounds that seems spaceshippy to me, and gives (I hope) the impression of sleek sophistication.

The second ship is almost the polar opposite of the first. It’s big, slow, and fashioned from random bits and pieces my refugees had access to. It isn’t an engineering masterpiece, but it did save the lives of fifty people marooned on a planet about to be destroyed by an asteroid. It needed a heroic name. Or at least one that spoke of the hardship it’s passengers endured, and their determination not to die, not to be left behind.

It’s called The Tenacity. Because the people left behind on the planet said that the only thing that would save them was Nerris’s tenacity. And since he built the ship, they named it so.