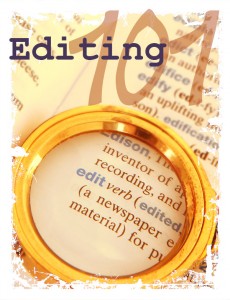 Well, we’re not quite there yet. First, we need to read over the story for things that don’t make sense, places where your characters change. While editing, I discovered that in one scene, Marlee noted that Tyris’s cheeks were stubbled, in the next, she stroked his smooth cheeks. And since he was unconscious, I don’t think he shaved in that time! In another, I mention that a character is somewhere else, then moments later, he’s talking in this scene!

The best way to find these errors is to read through as critically as you can. If possible, have a friend read through as well. While you’re doing that, keep an eye out for these changes as well.

Does anyone else remember the recomendation given in conflict to use ‘I’ statements? For example, instead of saying, “You’re being mean to me”, it’s better to say “I feel like you’re being mean to me”. It distances the person you’re talking to from the action, makes it an interpretation of the feelings, not a description of them.

We don’t want to do this in novels. Saying “He thought”, or “She looked” creates the same distance between the reader and the character, and is less likely to draw them into the novel. It’s worth looking through the novel and removing as many of these distancing phrases as possible. (Sometimes you need to keep a few for clarity, the idea isn’t to remove every single instance, just most.)

Writers are often told to ‘show’ not ‘tell’, but sometimes it’s hard to be sure what the difference is. If you remove all the ‘he thought’ type statements, that will be a huge step in the right direction. Once you’ve done that, look at your characters emotions.

It’s very easy to say “Marlee felt happy”, but this is a classic example of showing not telling. It tells us far more about the character to say “Marlee skipped all the way home”.  Instead of “Tyris was angry”, show us that he is angry. Have his brow furrow, his face go red, or have him punch a wall.

Showing emotions is one I struggle with, so I had a lot of work to do in this area. “The Emotion Thesaurus” is a book I higly recomend if you struggle with this as well. It lists many common emotions, and ways to show them. Well worth the price, I use it nearly every time I sit down to write/edit.

It’s taken me quite a while to get a handle on this one. I’m still not sure I’m qualified to really explain it, so do a search, and read up on it a bit. The simple matter is, if you do a search for the word ‘was’, and remove as many instances of it as you can, you’ll go a long way to removing passive voice.

While you’re at it, search for ‘were’, ‘get‘, and ‘had’ (though leave it in for paragraphs in past tense, or they won’t make sense).

There are a lot of words that are downright unnecessary in novels. Beginning, again, just, very, and but. Removing these words will tighten your writing. Try it and see.

Using these few simple techniques can make a big difference to how smoothly your book reads, and how close a reader feels to your characters. Check out the two paragraphs below to see the difference.

Tyris followed her through the gently falling snow, glad of the extra warmth from the coat. He glanced quickly up at the sky, grey clouds obscuring the sun and suspected it would be much deeper before nightfall. Looking ahead to Marlee, he noticed her limp had become more pronounced, the snow, though it was only a few inches thick, was making it harder for her to walk. So he caught up with her in a few strides, and taking the bucket from her, held out his arm for her to lean on.

Tyris followed her through the gently falling snow, glad of the extra warmth from the coat. Grey clouds obscured the sun and the snow he trudged through would probably be much deeper by nightfall. Even the few inches of snow made walking difficult, and Marlee’s limp had become more pronounced. Tyris caught up with her in a few strides, and took the bucket from her. He held out his arm for her to lean on.

For extra reading on this type of editing, try:
Rivet your Readers with Deep Point of View, by Jill Elizabeth Nelson – talks about how to remove the barriers between your readers and character
The Little Book of Self-Editing for Writers, by Bridget McKenna – Lots of search and find ways of improving your writing

Next week will be the final in my editing series, and in it I’ll cover proofreading techniques.

If you missed the first parts in the series, you can find them here.
Part 1 – The Big Picture
Part 2 – Character Development
Part 3 – Charts and Graphs
Part 4 – Do your Scenes Say What you Think They Do?